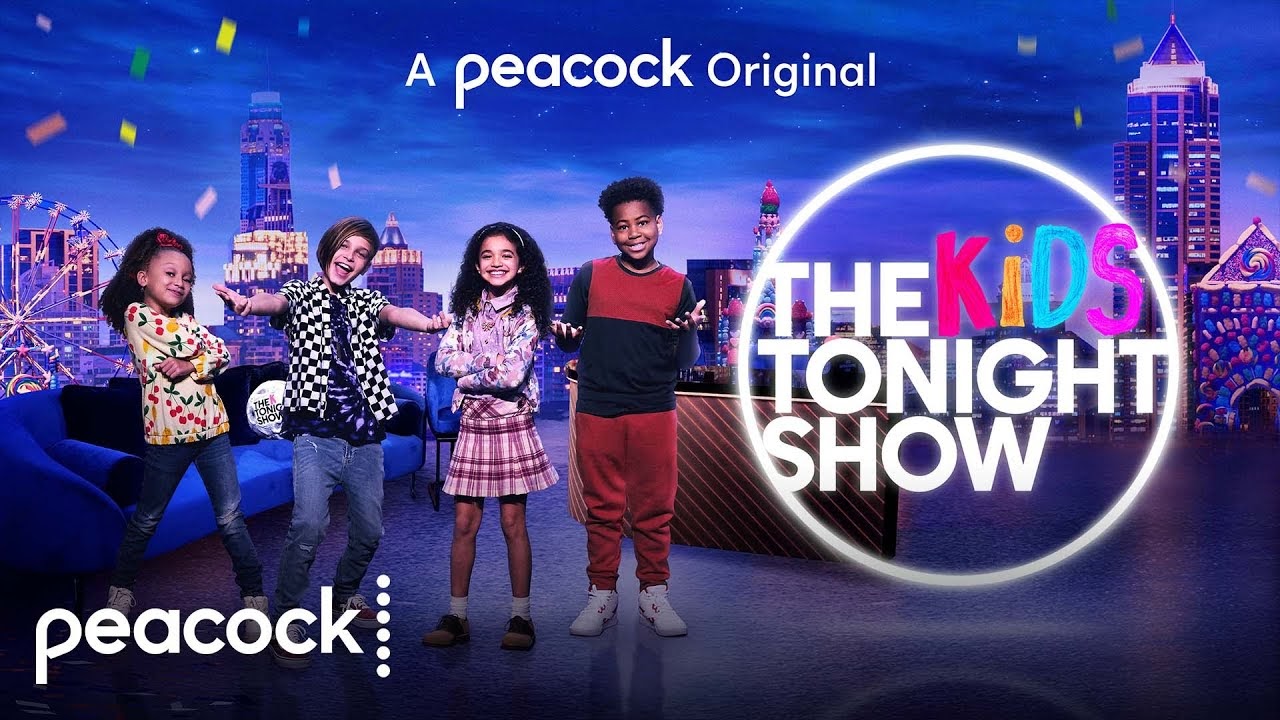 At long last, NBC has made the leap into creating a kids-based “late night” talk show, with the less- than- creative title of, The Kids Tonight Show. The show premiered on October 14, 2021 and is executive produced by Lorne Michaels (SNL, 30 Rock, The Tonight Show) and Jimmy Fallon. The show streams on Peacock (NBCUniversal’s streaming service) and features 4 preteen hosts interviewing guests, playing games, and taking part in all kinds of juvenile shenanigans. The show transforms the classic late-night formula into 15-20 minute long episodes directly targeting audiences ages 6 to 12.

The show is recorded across the hall from  The Tonight Show Starring Jimmy Fallon, with a familiar late-night-themed set, except that the skyline is made of candy and there is a giant ball pit on stage right. The Kids Tonight Show follows a formula similar to that of almost every late-night show currently on air. The hosts open with a “monologue” which seems more like the tween hosts are reciting jokes straight out of a joke book. After the brief opening monologue, the kids quickly transition to introducing  their guests. The interviews are brief, with the tween hosts taking turns asking questions. Of course, once the interview finishes, the real fun begins, with the kids playing a variety of wacky, extravagant games with their guests. These games are less about getting enticing information or sound bites from the guests, and more about raising as much mayhem as possible.

Mayhem seems to be one of the foremost themes seen in The Kids Tonight Show. In each episode, the hosts give the audience a buzzword, and if the buzzword is said during the episode (which it ALWAYS is) mayhem is unleashed upon the set. The antics turn the set  into a kid’s total dream, with mountains of confetti, silly string, loud music, and flashing lights released upon the set. This is a classic tactic used across all types of kids programs to entice their audience to keep watching, and to feel like they’re a part of the show.

The show often relies on eye-catching graphics like one of the hosts throwing up “unicorn vomit”, or making it look like their head is on fire, in order to further grab their audience’s attention.

The show provides a wish-fulfillment factor for kids with the segments it showcases. One segment, “Flip Your Sheet” operates exactly how it sounds. The hosts flip a gigantic sheet cake, and if they drop it, they have to eat it. Another segment, “Barf Cam” is a montage of each of the hosts “vomiting” CGI rainbows, poop emojis, unicorns, and other graphics sure to catch a child’s eye. But, sometimes segments add an educational element, such as the one with NBC anchor Lester Holt. Having a professional news anchor as their guest, the children took their time to discuss “fake news” and asked Holt how kids can identify it. This segued into a segment where Holt read off various headlines and the kids had to identify whether or not it was fake news.

The show serves up a plethora of diverse guests, all of which are familiar faces for most younger audiences,while also likely catching the eyes of some viewers’ parents. The show opened with a familiar-faced guest for all audiences, Jimmy Fallon. In addition to Mr. Fallon, other guests have included: The D’Amelio Sisters, Meghan Trainor, QuestLove, Matthew McConaughay, JoJo Siwa, Lester Holt, and Kristen Bell.

Executive producers Lorne Michaels and Jimmy Fallon have done everything they can to adjust the late-night talk show formula for younger audiences. A mainstream kids-based talk show has long been missing from the media market, so this show  feels like a natural progression for NBC to fill the gap. The show clearly has the best shot at success in the extremely desolate kids talk show market with the high production value, relatable kid hosts, and extremely extravagant segments which are sure to keep kid audiences attention while they watch. But while watching this show, it can become hard for one to imagine that kids are interested in a talk show (especially when you consider how even day time and late-night talk shows are struggling more and more to draw in audiences in the digital age) when they can watch their favorite celebrities on social media so easily from their phones or tablets.

All episodes of the first season are now available to stream on Peacock, which offers a free subscription so long as one is willing to watch ads.