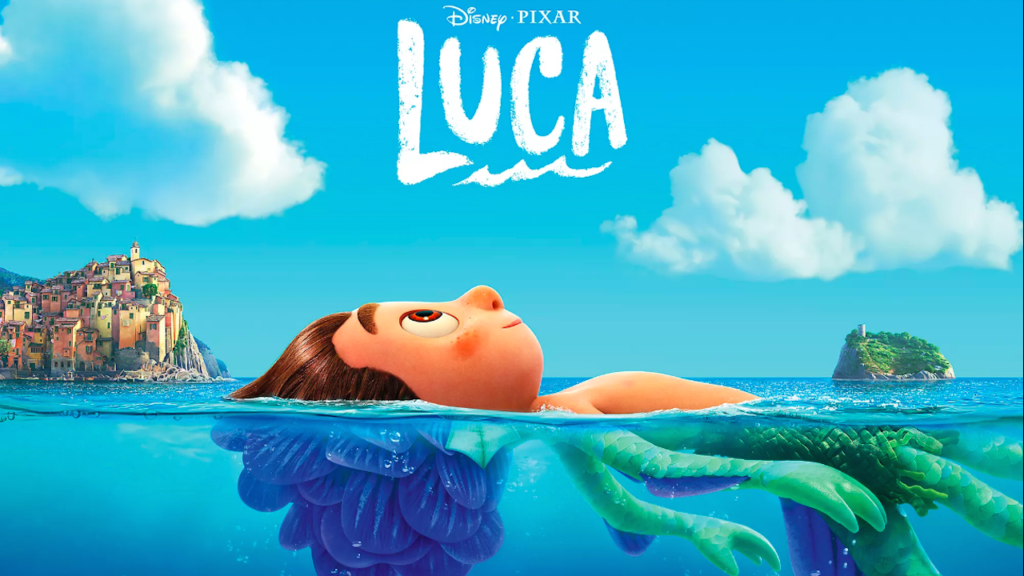 Luca, the latest Pixar film released on Disney+ in 2020, tells a classic Pixar story. It is a character-driven fantasy story that follows a young boy, Luca (played by Jacob Tremblay) who happens to be a “sea monster” living on the ocean floor, working as a shepherd for his overbearing and somewhat uptight parents. One day, Luca meets another young sea monster, Bruno (played by Jack Grazer). Bruno introduces him to the world on the surface (also known within the movie as the “human world”). The two boys slowly befriend one another and go on simplistic adventures (such as practicing swan diving into the ocean off cliffs) as young boys navigating this new world, discovering more about each other, themselves, and the world around them.

The plot of Luca follows the two young boys pining after obtaining a Vvespa scooter. To them, this object represents both humanhood and freedom in a way they had never imagined. Early on in the film Bruno shows Luca a Vespa scooter advertisement, and explains to him how once they get a scooter, they can run around the surface world and see all the unique sights the world has to offer. To obtain their beloved Vespa, the two friends journey to a local human town on the coast of Italy and enter a triathlon with enough prize money make it possible for them  to afford a Vespa. Along the way, the two befriend a local human girl who opens their minds even more about the marvels of the world around them. At one point, their newfound human friend explains the two boys the concept of the universe, absolutely blowing their minds.

The main crux for the two lead characters is concealing their identity as sea monsters to the humans they come in contact with and befriend. In this small coastal Italian town, sea monsters are something to be feared or hunted and killed. One character specifically makes it his mission to prove the two young boys true identities. The humans hunt and prey upon the elusive sea monsters, treating them like monsters straight out of the black lagoon. It isn’t until after the two young boys befriend the locals, after weeks of living undercover as humans, that they reveal their true selves to the townspeople. In a shocking turn of events the town welcomes them with open arms, unable to harm these two young boys they have slowly grown to welcome into their community.

The movie plays upon a lot of Italian stereotypes in order to garner laughs from the audience. There are plenty of pasta jokes, and jokes that play on classic Italian words and phrases. The boys actions convey an air of reckless abandon . The boys are consistently putting themselves in risky situations or thrust into ironic and tense scenarios. For example, in one scene Bruno and Luca fish on a boat with a mean fisherman. As the two mingle with the fisherman, Bruno slips into the water, turning him back into a sea monster. In a quick effort to save themselves, Luca distracts the fisherman as Bruno hops back onto the boat and hides himself underneath a pile of discarded fishnets. Some scenes provide a sense of wish fulfillment for younger audiences, as the two young boys are living on their own, navigating the world, living off of gelato and spaghetti.

One lesson the movie puts at the forefront of the narrative is to not let the evil voices/anxious thoughts in your head get in the way of your life. The two boys coin the term “silencio bruno” to shout out whenever they find themselves anxious or worried about something in their life. While sometimes this mentality puts them in harm’s way (as in one scene where Luca is too anxious to ride a bike down a steep hill in order to prep for the triathlon and Alberto pushes him to ‘silencio bruno’ and ride down the hill), it ultimately opens up Luca’s mind to realize just how strong, capable, and unique he is.

At its core, Luca is a coming of age story about self acceptance and found family. On the surface it plays as two young boys adventuring through coastal Italy, but the lessons the movie provides underneath the light and bubbly plot prove to make the movie a true tour-de-force.

After a long above-the-surface hunt, Luca’s family finally finds him and sees the townspeople accepting him. This leads them to accept Luca themselves, after spending a large part of the movie in denial about the state of their son’s interests, friends, and passions.

The movie perfectly exemplifies what Pixar does best, a small world, character driven tale, with a valuable life lesson at its core. Luca teaches a story of self acceptance and self trust, one that I wish I had been taught at a young age. It would be a bold-faced lie if I did not mention in this review that I cried throughout the entire final scene. To see the town and Luca’s family, accept him for who he is, is incredibly moving. This movie is best watched as a family, between both parents and kids. Luca is a story for all age groups, and provides all viewers an invaluable story, the story of accepting people who are different from you.