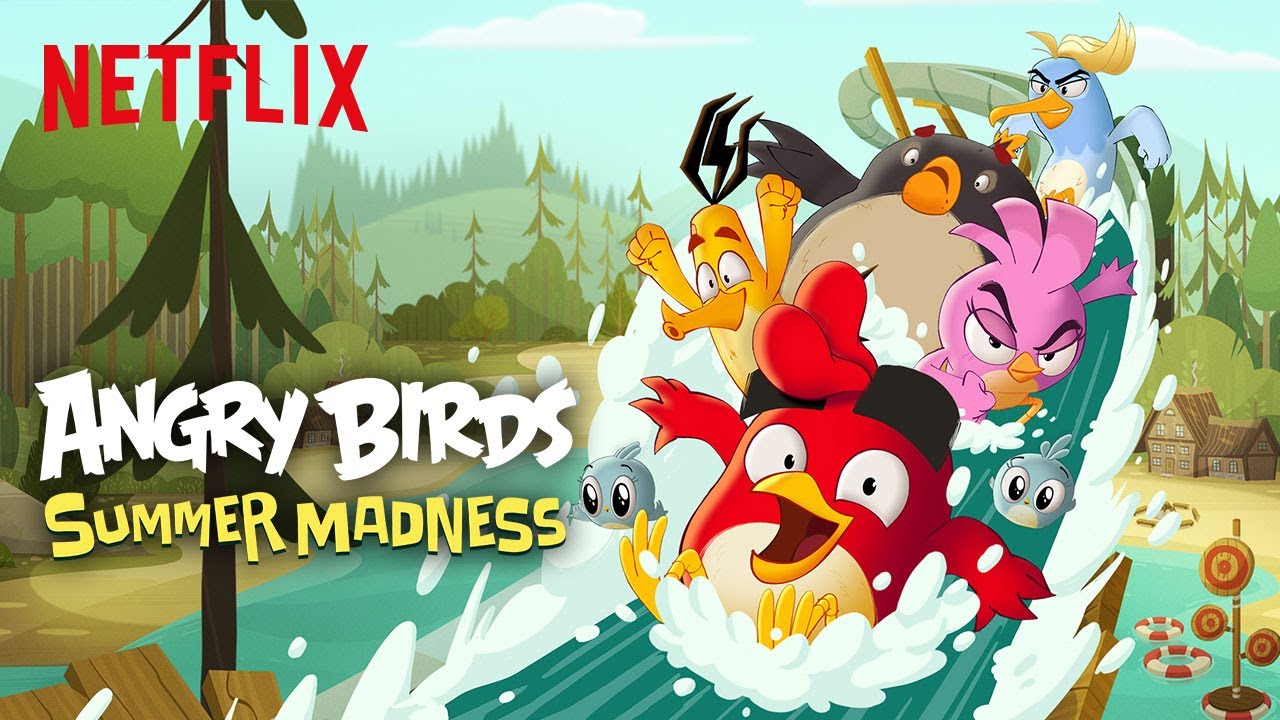 At this point, it feels like everyone in the world must knowt the Angry Birds. Having sold over ten million copies of the mobile game, spawning multiple movies, t-shirts, sweatshirts, plush dolls, Lego sets, mini figurines, and so on, the Angry Birds have been a merchandising juggernaut since the mobile app’s original release in 2010. With fewer markets left to explore, after spreading the Angry Birds IP thin over the last 12 years, Angry Birds has now entered the TV streaming space with the new Netflix show, Angry Birds: Summer Madness.

The television show follows four campers, Red their fearless leader, Stella the audacious pink bird , Bomb the gentle giant, and Chuck their energetic yellow bird friend, as they attend Camp Splinterwood. Each of these characters are  replicas of some of the most iconic playable characters from the mobile app Angry Birds. Episodes follow their day-to-day shenanigans while attempting to escape trouble and also stop the camp bully, Neiderflyer.

One episode showcases the camp-wide “dodgebird” tournament where our main characters go from the underdogs to the winners of the championship. Another episode features a baking competition where we see Bomb take home the grand prize. And in another episode our main characters find themselves on “Pig Island” and have to manage their way out of the throngs of the dastardly pigs.

Almost everything about this show is pure entertainment. It leans heavily on violent slapstick comedy, as they are the angry birds. There is little- to- no character development or lessons to learn  from our main characters, other than the importance of friendship and having people to rely on, as they are constantly saving one another from harm or punishment.

What is most interesting about this show is how little carry over there is from previous Angry Birds intellectual property. There is no crossover of themes or characters between this program and the previous animated movies, The Angry Birds Movie 1 and The Angry Birds Movie 2. The characters are completely different, the storylines are different, even the animation style is different. The iconic “pigs” which were a pillar of the mobile app game, are relegated to simply another set of characters in the television show Angry Birds: Summer Madness. The pigs  attend a summer camp on another island but are not the antagonists they were made out to be in the video games.

It is interesting for Angry Birds to release a new franchise now, especially one that feels a bit too much like a cash grab for younger audiences (with its less than inspired flatline storyline). The same week Angry Birds Summer Madness was released on Netflix the new “modern” game of Angry Birds was released on all mobile app stores. Seeing the show released alongside a revamped version of the classic game, this seems like one final ditch effort to get the beloved Angry Birds to remain relevant in pop culture. The game was a huge cultural movement at the time of its release in 2010 but at this point it feels like the creators of the app are milking these poor birds for every last penny they can possibly get. While kids will likely be interested to see all of the bombastic trouble these birds get into, there really isn’t much to chew on in this new installment in the Angry Birds franchise.