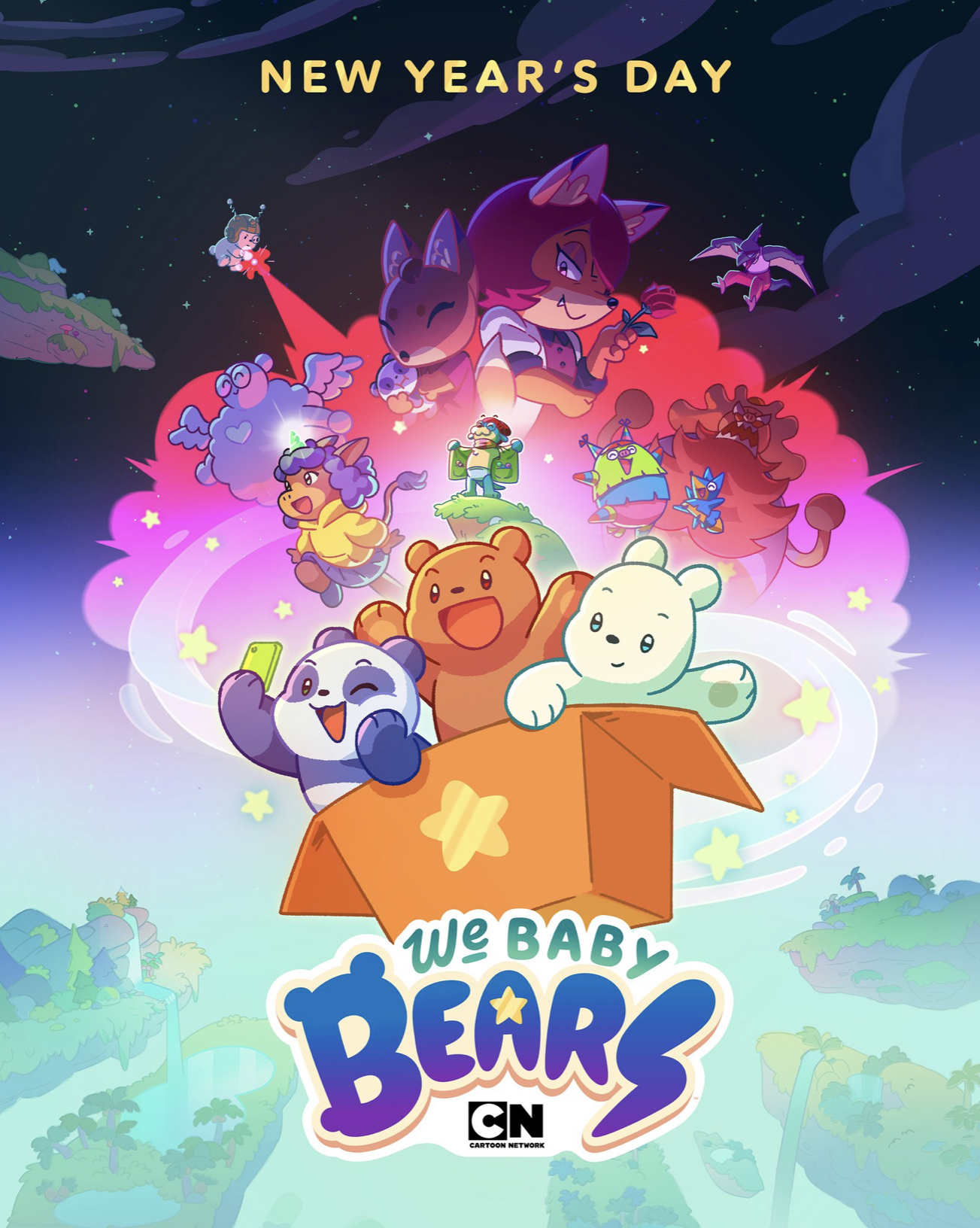 I was first exposed to the lovable and silly bears that make up We Bare Bears and We Baby Bears in my senior year of high school during my AP U.S. Government and Politics course. After finishing the AP exam, with more time to kill in class than ever before, my teacher put on We Bare Bears, a show he enjoyed watching with his daughter. These three bears caught the attention of nearly everyone in class. From this point on, nearly anytime we had free time in class my peers begged my teacher to put on We Bare Bears, proving that this show (now franchise) had a mass appeal, greater than just the younger audiences tuning into Cartoon Network.

We Baby Bears, the latest Cartoon Network We Bare Bears spin-off, is a product of its time. In the age of Hollywood reboots and origin stories from movies/TV (like Cruella and The Joker), it feels right to see the hugely successful three brother bears of We Bear Bears get their own origin story.

We Baby Bears follows the story of the beloved We Bare Bears, Panda, Grizz, and Ice Bear as children on a journey to find a home. The series starts with the three young bears being displaced from their current residence after being “rowdy” tenants. Trouble follows these three lovable bears almost anywhere they go. Lost on the streets of an unnamed human city the three bears stumble upon a magic star box, which has the power to grant any of their wishes. Finding the magic star box begins the three brother’s journey to find a new home.

Each episode follows the same narrative structure, beginning with the three bears being sent to a new potential forever home by their magical star box (like a giant’s home in the sky at the top of a beanstalk, or a mermaid’s undersea lair, or a magical fairyland), then they try their best to please their new roommates (usually by cooking them dinner), and then after failing miserably at being good roommates the bears are sent to a new home by their magic box.

The show is clearly meant to appeal to a wide audience, not just 7-10 year olds. In fact, I myself, at the age of 21, have watched far too many episodes of the show than I’d care to admit. What makes this show so appealing to a diverse audience is that you can’t help but root for these three endearing little bears. With their innocent rapport with one another, their endless endeavor to find a new home, and the cute animation style, there’s lots for audiences of all ages to love. There is little to no educational value to this show, unless you count the perseverance of the three bears to find a home. The bears consistently get themselves into trouble, whether  by being possessed by an old butler straight out of an Agatha Christie novel or freeing a giant’s golden egg laying goose, but seldom face any consequences or learn from their previous mistakes. At the end of every episode, without fail, their magical star box saves them in the knick of time and sends them to another dimension in hopes of finding their forever home.

The show primarily relies on slapstick violence and witty one liners (usually from the stone-faced Ice Bear) as a form of comedy. What comes across as shocking is the vocabulary on display in the show. Oftentimes, the characters will throw out culturally relevant one liners or words that would only be understood by  an  older audience. At one point the youngest bear brother goes on a tirade about landlords being pointless “cogs in the machine”; another time the same bear yells about the downsides of living in a “patriarchal society”. This signals that the producers and writers of this show know the show attracts a child audience and an adult audience and understand how to attract both. Many of these culturally relevant aspects of the show will likely go over the younger audiences heads, but older audiences (like parents or siblings of kids or even just late middle school/high schoolers who have watched the show since its’ origin) will find these elements endearing or captivating.

An extremely energetic and colorful animation style is on display in We Baby Bears with an intense amount of eye candy for all audiences to consume. The animation style draws from anime influences, with big, wide eyed facial expressions, or cut-scenes with a more subdued, juvenile animation.

There is so much for audiences of all ages to latch onto in the show, but the most notable aspect is that while this is targeted towards younger audiences, there is very little for these audiences to learn from watching this show. It is just pure juvenile madness, with the bears consistently escaping trouble and punishment through their own wits and cuteness. Nonetheless, the show has a huge entertainment factor, with three immensely likeable and endearing characters at the helm of the show and a unique and colorful animation style to boot, it will be quite some time before these three bears leave the kids entertainment space.

We Baby Bears premiered on January 1, 2022 and there are now 10 episodes available to stream on HBOMax, as well as all of We Bare Bears.